Before discussing this issue in detail the simple and straightforward answer is that you can can’t use. 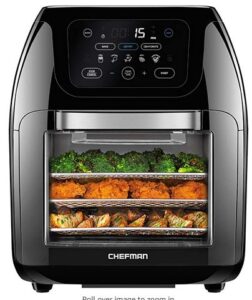 The main distinguishing feature of a convection oven is that it is made for baking foods. If you are looking for a kitchen appliance to serve the functions such as roasting, grilling, browning, and getting crispy and caramelized results then there is no better choice than a quality convection oven.

The convection oven works on simple principles. The whole food cooking process is made possible by circulation of hot and dry air. The hot and dry air is circulated by the built-in fans of the oven.

The beauty of this machine is that it produces lower temperature and distributes heat evenly across the cooking space resulting in fast and even cooking. Another benefit of convection oven is that it is smaller than other ovens so it takes less space when your kitchen has a limited space to accommodate a new kitchen gadget.

Convection oven is not a new machine such as air fryer that introduced in 2012. The convection oven first came in use in 1967. The Malleable Iron Range Company created this cooking system and placed on market for selling. The cooking system became popular with passage of time and now a kitchen is considered incomplete without this gadget.

The main cooking jobs for which this handy and multi-functional gadget can be used for include but not limited to;

Besides the above-mentioned jobs you can also use it for making pasta, popcorn, macaroni, boiling and heating liquids and son on. It means the convection oven can perform a lot of diverse jobs in your kitchen; its capabilities are not just limited to baking and grilling.

The name use for this appliance is microwave oven which is misleading and funny because it is not an oven but just a gadget that can only be used for reheating the cooked food. You can’t use microwave oven for cooking raw food. This word oven is added to its name because the microwave word alone can’t explain the function the machine is made for. A lengthy name for this kitchen appliance can be a microwave food reheating system or another combination of words can be used. If you know the functions the microwave is made for then it will not cause confusion. And you will not expect the functions of oven from this simple already cooked reheating system. But for a newbie it is not easy to understand the difference between microwave oven and convection oven.

Microwave is loved for its simplicity. It is incredibly simple to use when compared to convection or other types of oven. The working process is so simple that even children can use it. The machine is equipped with button for reheating different types of foods and liquids.

Microwave is very fast as well as energy efficient when compared to other types of oven.

Microwave first developed in 1930 but for commercial use they were available in 1947. But for domestic use the kitchen lovers had to wait for another 20 years when the company The Raytheon Corporation introduces the first domestic microwave in 1967.

Microwave gained popularity with passage of time; the main factor played a vital role in its success was the busy life schedule. Life became faster and people had little time to do their routine kitchen jobs and more prone to cook a plenty of food so they can then just reheat with help of this kitchen gadget.

As in this article we already mentioned this kitchen gadget is just best for reheating the already cooked food but you can use it for other simple recipes such as pasta macaroni, popcorn, half cooked meal cooking, heating of milk, coffee or tea preparation and boiling water and more.

Personally I don’t like to use this kitchenware for my routine cooking. I love to use my regular cooktop because of the freedom and control I enjoy. There is no restriction when I use regular stove which in case of microwave is completely lacking. In case of cooktop you have more control over the cooking process.

The freedom and control I enjoy when doing cooking while using my kitchen stove include regulate the temperature, checking the taste of food, adding, oil, water, spices and anything the recipe needs without restrictions. While in case of microwave, I don’t have this freedom to drive the cooking process in direction it deserves.

Stove-top cooking comparatively slower than microwave based cooking, but there is also a big difference in taste. If you follow the roles of a recipe more meticulously the results will far more delicious.

Microwave is bounty, a great time and lifesaver for busy folks. This is the reason this cooking system is more popular among students and people with tight time schedule. But the  professionals chef who are aware of the nitty gritty of the cooking and how the results badly affected by it prone to skip it. They don’t like this heating system for cooking foods because it is not reliable. You have less control over the cooking process.

If you are looking for a kitchen appliance to serve in both capacities as microwave as well as convection oven then convection microwave is best choice for. You can reap the benefits of two different machines with one simple kitchen gadget. You can save money plus the precious kitchen space. Furthermore it is easier to deal with one appliance instead of two or more.

The beauty of convection microwave is that it heats the food from exterior to high temperatures when compared to regular microwave. It offers the features of regular microwave but the additional features such as crisping and browning effects make a big difference.

As these kitchen appliances are made for different purposes to serve so we can’t decide which one is better for you. The decision totally depends on your intended use. If you want your future gadget should be best for reheating the already cooked food then microwave is the ultimate choice. Or you expect from your new kitchen gadget to perform diverse functions such as roasting, baking etc. then convection oven is the best choice.

If your kitchen is already equipped with a convection oven then you can use it for reheating the already cooked food but you can’t expect the same level of performance as you expect from microwave.

As mentioned above there is a hybrid child of both these machines called convection microwave that comes with features of convection oven plus microwave oven, so you can also consider it in your buying decision.

This Site Owner is a participant in the Amazon Services LLC Associates Program, an affiliate advertising program designed to provide a means for sites to earn advertising fees by advertising and linking to Amazon.com. Our editors independently research, test, and recommend the best products.We may receive commissions on purchases made from our chosen links.