Air fryers are quite popular among the health conscious folks who want to enjoy the same taste as the deep fried food but looking for a cooking system that can either make possible the cooking with not fat or less fat. These cooking machines are advertised as a healthy and guilt free alternative of the traditional deep fryers. So air fryers have experienced a recent boost in popularity by heavy media coverage. The quality of food taste and texture are debatable but as far as fat reduction is concerned the results are praiseworthy.

Air fryers have been marketed with claims that they can help to lower the fat content of common deep fried foods such as chicken wings, French fries, fish sticks, empanadas and more.

But the question is how healthy is the cooking with air fryer?

So in this article air fryers do they work, we will explore this topic from different angles health as well as taste. Besides health, taste is also important. If your air fryer lacks the ability to provide the comparable taste to deep fried food then the user will never use it again. Because majority of people who invest in this cooking system is to get the same results as deep fried machine but want to curtail the fat content drastically.

So air fryers are marketed with these two slogans;

What is an Air Fryer?

An air fryer is quite popular kitchen appliance. It is used for cooking of different types of foods such as French fries, meat cooking, pastries and more.

This machine works with application of hot air. As there is no liquid use, so hot air is the medium makes possible the cooking process. The hot air is circulated around the food to make possible perfectly cooked results with juicy interior and crunchy/crispy exterior.

Air fried foods are advertised as the healthy alternative of deep fried foods because of their lower fat content as well as calories. 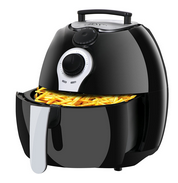 Does air fryer offer the effective way of curtailing fat?

As already mentioned in above lines that there are some models of air fryers where the manufacturers claim that their cooking machine has the ability to curtail the fat content by 75% when compared to deep fry cooked food.

This claim is true because the air fryer requires extremely low amount of fat than traditional deep fryers. For example in majority of cases the deep frying recipes need 3 cups of oil ( 750 ml) while air fried foods just demand for one tablespoon of oil (15 ml). So the difference is material. So the claim of the air fry is true that they can curtail the fat content of your recipe by 75 percent.

There is a big difference in fat content. Deep fryers use up-to 50 times more oil when compared to air fryers. All oil is not absorbed by food in deep frying cooking style but it still absorbs the fat that is substantially more than amount used by air fried food. So using an air fryer can significantly curtails the overall fat content of your food.

According to one study that compared the features and attributes of deep fried French fries with air fried French fries found that air frying resulted in a final product with materially less fat content while the texture and moisture level is almost the same.

Even if you are using vegetable oils for your cooking you are not safe. Because higher intake of fat from vegetable oil can increase the associated risks such as inflammation and heart diseases.

Deep fried foods not only rich in fat but also come with generous amount of calories so they can increase your weight.

According to results of a study of 33 542 Spanish persons that fat rich deep fried food was associated with weight gain.

So if you want reduce your weight and don’t want to exclude fried food from your plate then switching to air frying style can help you materially.

Air fried foods carry less fat and calories when compared to deep fried food so switching to an air fryer may be an easy way to curtail calories and reduce weight.

Air Fryer and Its Ability to Curtail Harmful Substances Creation

Acrylamide is “probable carcinogen” and has the properties that can cause cancer according to International Agency for Research on Cancer.

Air fryer can reduce the creation of acrylamide substantially. In food cooking process using air fryer the acrylamide creation is reduced by 90 percent.

Other harmful substances created during high heat cooking process such as air frying include;

According to medical research the aforementioned substances are carcinogen (cancer causing).  Further research is required whether air fryer have the ability to reduce these substances or not.

The cooking results of air fryer may be healthier than deep fryer in several ways.

This Site Owner is a participant in the Amazon Services LLC Associates Program, an affiliate advertising program designed to provide a means for sites to earn advertising fees by advertising and linking to Amazon.com. Our editors independently research, test, and recommend the best products.We may receive commissions on purchases made from our chosen links.